Imagine a crowd of physicians marching on the streets of Washington D.C., chanting “Better healthcare! Lower cost! Happier doctors!” In early 2017, this image wasn’t far from the truth.

In January, the Hint Health team flew to Washington D.C. to campaign on behalf of the Primary Care Enhancement Act of 2017 (PCEA 2017, H.R. 365). This bill would allow patients to use Health Savings Accounts (HSAs) to purchase Direct Primary Care (DPC). DPC has been shown to increase medical care quality, lower healthcare costs, and improve physician job satisfaction. If the IRS permitted patients to pay for DPC through HSAs, more doctors could upgrade their practice to the innovative Direct Care model.

This financial restriction was itself originally an accident. Since DPC operates on a monthly membership model, it was unintentionally disallowed by language originally intended to prevent HSA use for gym memberships. The Department of Health & Human Services (HHS) itself suggested to the IRS that DPC should be HSA-eligible because DPC medical care is not an insurance plan,[1] but the IRS lacks proper authority to follow the HHS guidance. While all parties agree on the spirit of the law, they are unfortunately restricted by its letter.

Congress members have been working since 2014 to fix this misclassification. The current front-running bill is PCEA 2017, submitted by Representative Erik Paulsen (R-MN) on January 6. In layman’s terms, PCEA 2017 would classify DPC as healthcare, not insurance, which would allow HSAs funds to be used to pay for it. Because this issue is purely a misclassification, Paulsen’s near-identical Primary Care Enhancement Act of 2016, (PCEA 2016, H.R. 6015) received bipartisan support, including co-authorship from Democratic Representative Earl Blumenauer (OR). This classification would allow patients who pair a high-deductible health plan (HDHP) for large expenses with an HSA for everyday expenses to pay for Direct Care through their HSA.

Many patients would benefit from this fix: in 2015, a full 24% of all workers paid for medical expenses via pairing a HDHP with an HSA, and that number continues to grow rapidly. As of August 2016, the US contained 18.2 million HSAs, with that number projected to rise to 27 million accounts by the end of 2018. The amount of money stored in HSAs is expected to rise similarly, increasing from $34.7B to $50B in the same period.[2] 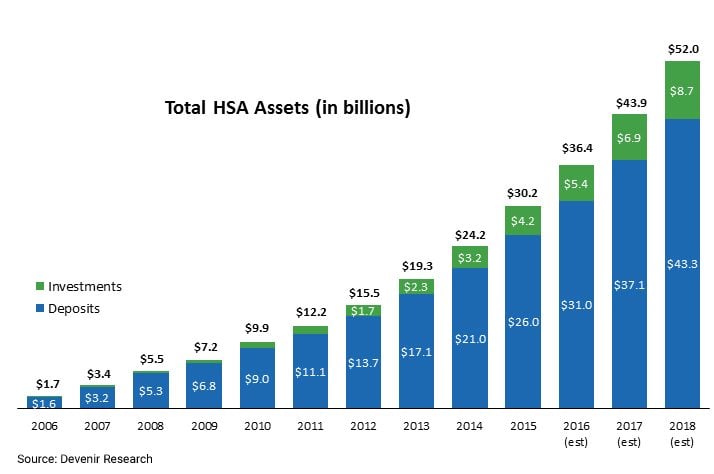 As consumer use of HSAs increases, proper reclassification of this financial instrument would also dramatically increase the number of patients able to access DPC, further improving American healthcare and physician quality of life.

Over the coming year, DPC’s highest political priority is the passage of this correction. Because Congress frequently passes laws shortly before a recess, PCEA 2017 is expected to reach the floor in late July, just before the August session break. If it’s able to garner enough co-sponsors by that point, the bill should pass without much issue; otherwise it will wait until Congress returns in the fall.

While PCEA 2017 is currently a three-page standalone bill that enjoys bipartisan support in both houses, it may also be incorporated into the “replace” part of President Trump’s promised “real-and-replace” of the Affordable Care Act (ACA). This avenue could significantly delay its passage, as the “replace” legislation is unlikely to have such bipartisan support. PCEA 2017’s best chance is to pass in the July session with strong co-sponsorship on both sides of the aisle.

Trump’s HHS Secretary Tom Price would likely support such an executive order, as it both aligns with HHS’s previous guidance and Price’s personal politics. Price has expressed a desire for “a more innovative and responsive healthcare system—one that empowers patients and ensures they and their doctor have the freedom to make healthcare decisions without bureaucratic interference or influence.”[4] His own Empowering Patients First Act of 2009 (H.R. 3400) repeals the ACA to start over with what Price describes as “patient-centered solutions” including “expanded HSAs and protecting and strengthening the doctor-patient relationship.” DPC fits Price’s goals through its innovative model which strengthens the doctor-patient relationship by freeing them from insurance companies’ “bureaucratic influence” on healthcare decisions.

How We Got Here

Like too many political stories, this problem started as a mere accident of wording which, due to Congress’s sluggish speed, has lasted years.

On June 17, 2014, three Washington State legislators first attempted to correct this misclassification via a letter to the IRS Commissioner. They argued that Washingtonians were being prevented from pairing DPC with a HDHP and that “employers, both small and large, see value in this model.” The legislators further pinpointed the problem, specifying, “it appears that the IRS has not updated policy to inform employers that DPC medical homes, as noted in the ACA, are not health plans.” They explained that this difference likely was an accident of “two very different parts of a large agency not having coordinated a complicated area of public policy.”

Thirteen days later, the IRS responded that it would look further into the matter, writing “The IRS and the Treasury Department are in fact reviewing the rules regarding what constitutes medical care expenses.” In the meantime, however, the Commissioner reiterated that the letter of the law prevents HSAs from paying for DPC. His statement that DPC will be HSA-eligible only if it’s specifically stated in the Internal Revenue Code demonstrates that, while the spirit of the law should permit HSA payment for DPC, the IRS implements the tax code based on the letter of the law.

Because the IRS lacks the authority to change their treatment of DPC without congressional guidance, Senator Bill Cassidy (R-LA) submitted the first version of the Primary Care Enhancement Act (PCEA 2015) on August 5, 2015. If it had passed, PCEA 2015 would have amended the tax code in the manner that the Commissioner specified, saying “direct primary care… shall not be considered an insurance product.”

PCEA 2015 also included provisions for an annual report from DPC doctors on the changes in their patients’ emergency room visits, hospitalizations, surgeries, specialist visits, and use of advanced radiology. This reporting was designed to provide a national longitudinal study on DPC. While many DPC practices have published studies showing that employers see a decrease in healthcare costs of approximately 25%, this national reporting would gather a larger data set.

Additionally, PCEA 2015 contained provisions for a DPC pilot program in Medicare, saying “no law shall prohibit a Medicare Advantage organization from… contracting with a qualified direct primary care medical home practice to offer primary care services.” Because of the size and scope of both the DPC reporting program and Medicare pilot program, neither were palatable enough to include in subsequent versions of the PCEA.

After Cassidy’s eleven-page PCEA 2015 failed to be realized, Representatives Paulsen and Earl Blumenauer (D-OR) submitted the three-page PCEA 2016 exclusively amending the tax code. Aside from the two section removals, this bill was almost identical to PCEA 2015, with a single addition clarifying the term “medical care.”

Now in 2017, Paulsen re-introduced the PCEA. This bill is itself identical to Paulsen’s own PCEA 2016, but for another small amendment to the definition of the term “medical care.”

Long story short, the PCEA 2017 has a long-drawn-out history, most of which can be explained by the Congress’s characteristic sluggishness.

Because it’s merely a correction to a previous misclassification, few lawmakers disagree with the PCEA 2017 itself: the most prevalent disagreement is an argument against HSAs. The argument suggests that, since HSAs are not taxed when money goes in, comes out, or is passed to heirs, they may be improperly used as a tax-free inheritance vehicle. This criticism does not have a direct aversion to the PCEA 2017, but merely poses an argument against HSA expansion (which passage of the PCEA 2017 may contribute to). However, even this argument may in fact be a positive for the PCEA 2017: since DPC takes healthcare funds out of an HSA every month, the PCEA 2017 itself would actually encourage use of HSA funds for medical care, as HSAs were originally intended.

We Need Your Help!

With enough co-sponsors, PCEA 2017 can pass this year and bring an end to this 3 year debacle. In order to pass, it needs your help. Please contact your elected representativesand encourage them to co-sponsor this bill. There are currently seven congress members co-sponsoring the PCEA 2017 and, while there’s no hard and fast number to guarantee passage, more sponsors will help it receive swift treatment when it reaches the floor later this year. If you take this action and encourage your patients to do the same, we’ll be one step closer to the better, cheaper, happier healthcare we all deserve.

An argument in favor of DPC + HSAs

Primary Care Doctor Shortage and How DPC Can Help